The Apple Fire in Riverside County, CA began on 31 July 2020

By the afternoon of 1 August, it had expanded to over 4,125 acres, requiring several evacuations.

adding to the growth of the fire, as can be seen in the Beaumont, CA observations from the last few days. The afternoon pass on 1 August afforded a view of the Apple Fire in the CIRA Fire Temperature RGB, which is now available in RealEarth. As you might expect, the channel combination really brings out the fire quite easily in the daytime 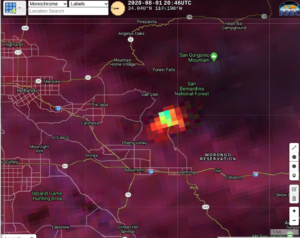 Overlaying the VIIRS Active Fire product from the CIMSS Direct Broadcast antenna, one can see very good agreement between the two products. 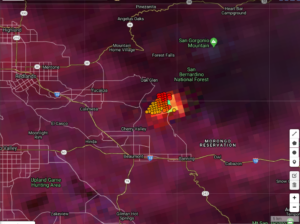 The fire continued to grow over night and as of 1am PDT CalFire reported the Apple Fire was over 15,000 acres and 0% contained.

Roughly 2 hours later at approximately 2:51am PDT (0951 UTC), NOAA 20 afforded a near nadir overpass of the region. The “traditional” fire channels (NIR, IR) could easily see the fire, with the M13 (4.05um) channel measuring a brightness temperature of over 400K in some parts of the fire. 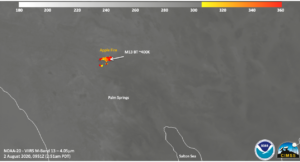 The NIR channels afford a good idea of where the perimeter of the fire is located. 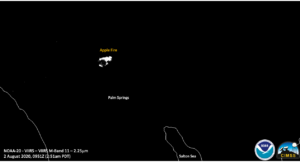 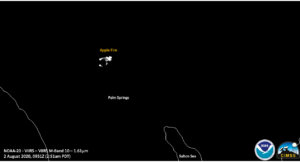 In addition, the VAF product could see hot spots from persistent sources (refineries and power plants in the region). 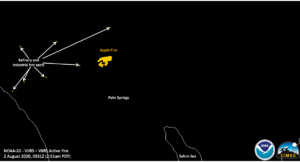 The waxing gibbous moon (99%) afforded enough moonlight to see the large amounts of smoke coming from the Apple Fire. 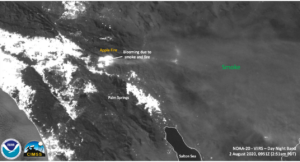 While in pictures from the day on the ground did show pyro cu,

From my house over 30 miles away pic.twitter.com/XdkmKyRDQj

none were obvious in the DNB imagery. Given the intensity of the fire and how bright it appears in the DNB, they might have been washed out by the intense visible and thermal light from the fire. 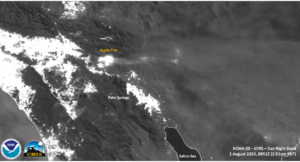 Interestingly the I05 (11um) channel does seem to indicate some possible cooling of the surface from the smoke downwind of the fire. 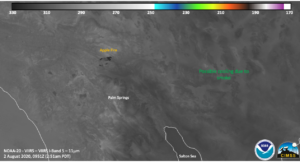 A zoomed out image of the DNB shows that the smoke was traveling from Riverside County all the way to southwestern Arizona, several hundred miles away. 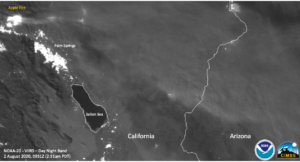 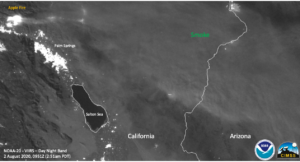 One can see the evacuation orders  from 2 August below, which as can be see are near Interstate-10, which is a major route for interstate commerce 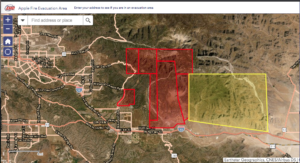