On April 27th, a major ice jam and melting waters caused massive flooding in downtown Fort McMurray. This forced over 15,000 people to be evacuated according to media reports. In addition, a mandatory “boil water” order was instituted as the Athabasca River overflowed its banks as a result of an ice jam that was ~24 kilometers long. In addition to the need for social distancing due to the ongoing CoVID-19 crisis, the mayor of the Regional Municipality of Wood Buffalo, Don Scott, to suggest to the Alberta Premier that the Royal Canadian Air Force launch an airstrike on the ice jam  to loosen it up. While the Mayor did say that “the sheer size of the ice jam itself that prevents the military from using explosives”, this is something the Russian Air Force did in 2016 along the Sukhona River. 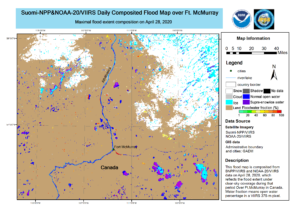 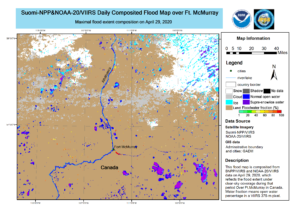 If we look at the Ptarmigan Trailer Park in Waterways as seen on the ground on 27 April, one can see massive flooding into the residential neighborhoods 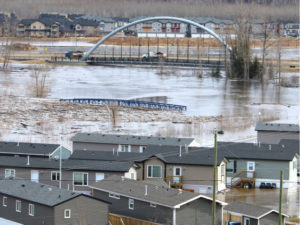 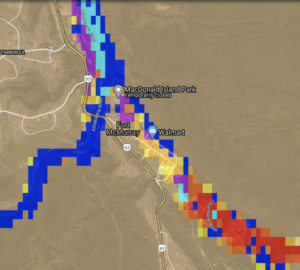 If we zoom in to the Waterways area on the 28th, we can clearly see that the flooding extends inland 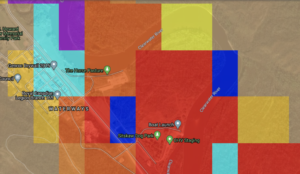 If we go upstream to look at downtown Ft. McMurray from the air, we can see inundation well into the city 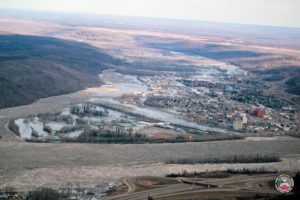 From Canadian Broadcast Company on 29 April 2020. Image from McMurray Aviation

Again, from the flood product also shows this flooding 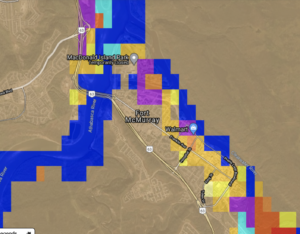 Ice jams, which are common in northern latitudes in the spring when river ice melts and floats down river due to melting, accumulates at a natural or man-made feature. Acting like a dam, it impedes the progress of the ice downstream with the river current. This can cause flooding upstream of the dam. Similarly, flooding can also occur downstream once the jam releases, causing a sudden outbursting of water. In both cases, structures near the river can be damaged.