On the afternoon of 17 August 2019, a fire believed to have been sparked by a man using a soldering iron  (who has since been arrested by local authorities, according to media reports) started and quickly grew to a major wildfire. The latest international media reports on 19 August 2019, over 9000 people have been forced to evacuate, including both citizens and tourists.

The initial fire was observed by the Meteosat-11 satellite using Band 4, which is the traditional IR fire band with a central wavelength of 3.92μm, on the Spinning Enhanced Visible and Infrared Imager (SEVIRI) instrument at roughly 1515UTC on 17 August, as seen below

While SEVIRI can provide the temporal notification, it does have the limitation of the pixel size being fairly large (3km at nadir). The following night, on 18 August 2019, the fire was seen by both S-NPP and NOAA-20. The fire was easily seen in the traditional fire channels (I04, M10, M11, M13) as well as the I05 (11μm, not shown) imagery. The I04 (3.75μm) channel is shown below 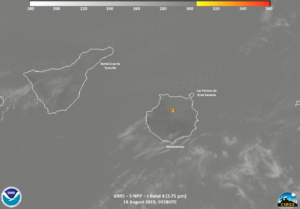 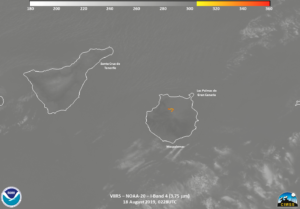 In addition, the Waning Gibbous moon (92% illumination) allowed the Day Night Band on VIIRS to observe the fire lines as well as some scattering of the light from the fire from the smoke, as seen below

The clearing of the clouds around the fire between the two passes allowed for a better observation of where the fire was as well as smoke coming from the fire.

The fire continued through the day of the 18th, which can be seen in the NOAA-20 True Color image below using the JSTAR Mapper, along with the M-Band VIIRS Active Fires product overlaid on it 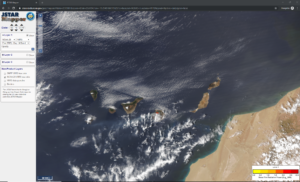 The most obvious thing that can be seen is the smoke coming from the fire. The fire continued into the 19th, where it was only visible in S-NPP, as Gran Canaria was near nadir and not visible to NOAA20. The near-nadir view of the fire from multiple channels on VIIRS, such as the NIR channels (1.6 and 2.2μm), which detail the perimeter of the fire quite easily. 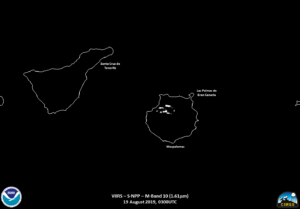 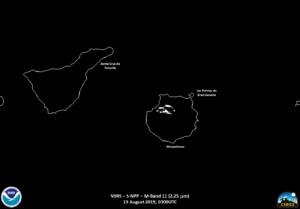 In addition, the Waning Gibbous moon with 86% illumination afforded a view of smoke coming from the fire. One can tell it is smoke by looking at the high resolution I05 (11μm) channel side by side with the Day Night Band in order to help distinguish the location of the smoke.

In addition, the NASA Fire Information for Resource Management System (FIRMS), which distributes active fire data within 3 hours of satellite observation from both the MODIS and the 375m VIIRS Fire products, continue to show fires on Gran Canaria. 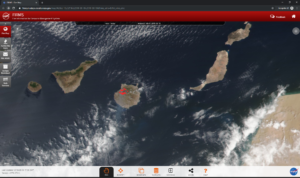 In addition, at approximately 1119UTC, the Sentinel-3b satellite flew over the region and observed the region with the Sea and Land Surface Temperature Radiometer (SLSTR) and Ocean and Land Colour Instrument (OLCI). The SLSTR is primarily used for global sea- and land-surface temperatures. However, it does have visible channels to help with NDVI and cloud clearing. Utilizing the 1.6μm (S5), 0.86μm (S3) and 0.65μm (S2) channels, which are also are on VIIRS (though at slightly higher, 375m) resolution), one can get an idea of the location of the burned area. 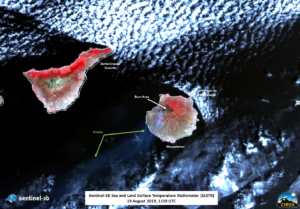 The Ocean and Land Colour Instrument has 21 distinct bands in the 0.4–1.02 μm spectral region (or 400 – 1020 nm) tuned to specific ocean colour, vegetation and atmospheric correction measurement requirements. Utilizing these channels, one can create a pseudo natural-color RGB to see the smoke more easily. 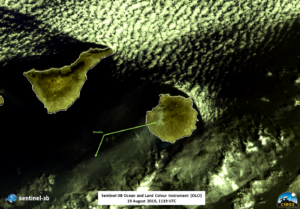 Roughly 14 planes and helicopters, as well as about 700 firefighters on the ground including 200 from the military, have been deployed from multiple units according to the Spanish Ministry of Defense as well as media sources. This is currently an on-going fire and is likely to last several more days.