The fires on Gran Canaria continue to burn as firefighters struggle to bring it under control. The New York Times reported that the blaze has destroyed nearly 25,000 acres on the island of Gran Canaria, including parts of Tamadaba National Park, which is home to several types of indigenous trees and plants. Nearly 10,000 people continue to be evacuated due to this fire.

As with previous days, the area was observed by VIIRS twice the morning of 20 August 2019. The first with another slightly off nadir pass from S-NPP at ~0240UTC and the next on the edge of the scan of NOAA-20 at ~0330UTC. The Waning Gibbous (79% illumination) continued to provide enough moonlight to see clouds encroaching on the northern part of Gran Canaria. While there was not a lot of smoke like previous nights, there was scattering of the emitted light from the fire, possibly due to smoke coming from the fire. 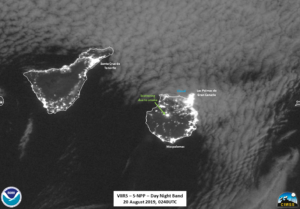 As mentioned in the previous post, the NASA Fire Information for Resource Management System (FIRMS) distributes active fire data within 3 hours of satellite observation from both the MODIS and the 375m VIIRS Fire products. This includes GIS compatible files, which allow one to overlay them on top of imagery, such as the M11 (2.2μm) to get an idea of the performance of the algorithm used, as shown in the slider below

As can be seen, the algorithm performs extremely well, even detecting a faint hot spot in the M11 band on Tenerife, which is the largest island in the Canary Islands. Given that it is both in the IR (I04, 3.9μm) and (faintly) in M11 (2.2μm) channels.

as well as lining up with a bright spot in the Day Night Band, shown below:

You may wonder what it is. As it turns out, that location is up in the foothills of La Orotava in an agricultural area. The fact that it disappears between the S-NPP and NOAA-20 passes, as seen in the DNB slider below 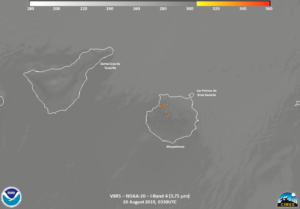 could mean that it is potentially be a agricultural burn of some sort. This is likely given there are no media reports of any fires on Tenerife itself.

Another thing to point out is the usefulness of the Active Fires product. The IR (I04, 3.9μm) imagery shown above utlizes the traditional enhancement that forecasters have used for decades to try and bring out wildfires. However, as can be seen when comparing the 375m resolution IR (I04, 3.9μm) with the SWIR M11 (2.2μm) with the FIRMS AF product on top of it, you can clearly see that some of the fire is missed by the traditional IR fire enhancement. By utilizing multiple channels, the AF product (which is at 375m resolutions) shows not only where all of the fire is located, but can also tell users the radiant heat of the fire, which is called Fire Radiative Power (not shown) as well as several other important properties about the fire.

Media reports mention that the weather forecast for Tuesday was more favorable and with less wind than on previous days making it for better for fighting fires.