As of the 1500 UTC public advisory from the National Hurricane Center (NHC), Hurricane Ian had maximum sustained winds of 155mph, making it a strong Category 4 storm and was moving on shore to the Florida Peninsula. Roughly 8 hours prior, Hurricane Ian was only a Category 3 storm with 120mph sustained winds, according to the NHC at 0700 UTC. NOAA-20’s pass occurred roughly 14 minutes later at 0714UTC with a near nadir pass. Similar to yesterday’s analysis, the high resolution (375m) I05 (11μm) brightness temperature imagery showed a well defined circulation indicative of a intense hurricane, but several tropospheric gravity waves, along with a well defined eye.

When you zoom in, you can easily see these features as well. One of the interesting thing to note is that the eye is not exactly symmetrical. It is possible that, as mentioned in the 0900 Forecast discussion, there was a little shear, so perhaps that is what is being seen

The moon was at Waxing crescent (8% illumination), meaning that the primary source of light in the DNB is from airglow. While this means that the finer structures are not able to be seen, it does allow for faint mesospheric gravity waves to be seen, something which has been observed during intensifying storms. In addition, the well developed eye was easily seen again in the DNB imagery 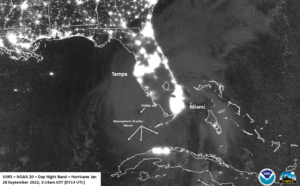 In addition to the IR and microwave imagery from NOAA-20, there was also a good pass from AMSR2 on GCOM-W1 roughly 20 minutes after NOAA-20 observed the storm. This provided a good opportunity for a comparison between AMSR2 and ATMS 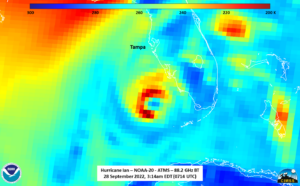 One of the other products from AMSR2 is a precipitation product, which is used as input to the CMORPH2 blended product. What can be seen is, at the time of the AMSR2 pass, most of the precipitation was offshore. 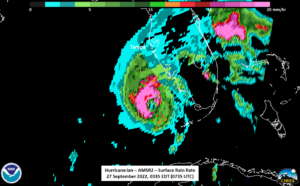 This is very consistent with what was going on with Hurricane Ian at the time as well as what is currently happening. This is because most of the precipitation occurs where the most convection occurs, which can be seen when comparing the VIIRS IR imagery and the AMSR2 precipitation imagery, shown below

The current forecast has Ian making landfall in the next several hours, with catastrophic damage and flooding expected to occur. Over the next several days satellites will help in observing the impacts from flooding and power outages after Ian departs Florida and the SE US.

Of note on how intense the winds from Hurricane Ian, NOAA’s Satellite Oceanography and Climatology Division, specifically the Sea Surface Roughness Group at NOAA/STAR, can derived winds from SAR imagery from a variety of satellites including Sentinel-1 as well as Radarsat-2, which are run routinely for tropical cyclones. These winds are produced using methods described in Monaldo, Jackson, and Li (2017) and  other publications. An example from Radarsat-2 from  27 September 2022 at 23:28:46 UTC is shown below. What can be seen is that there are winds of well over 55 m/s (120mph) in the SAR imagery, again consistent with what NHC was seeing at the time from aircraft observations. 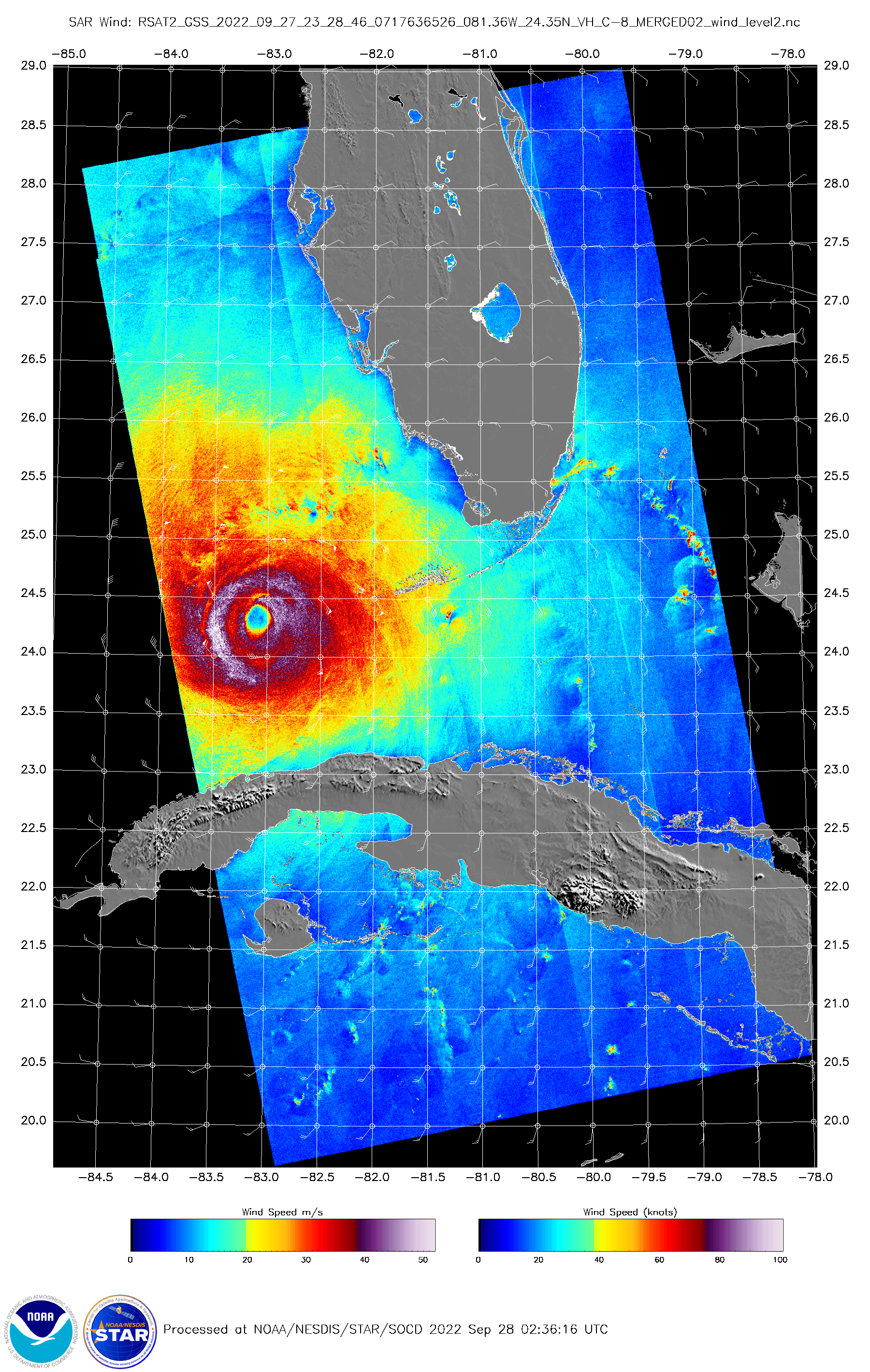 These winds are currently being used by NHC to help with hurricane forecasting.