After making landfall at 3:05pm Eastern time (1905 UTC) as a Category 4 storm with 150mph winds, Hurricane Ian sped across the Florida Peninsula and by 2:00am Eastern (0600UTC), Ian had dropped to have winds of only 75 mph, which is just barely a Category 1 storm.

At roughly 0654 UTC (2:54am EDT) NOAA-20 flew overhead with a near nadir pass as it began to exit the Florida peninsula. Orbital positions meant that NOAA-20 was the only satellite that could really observe Ian. There were several interesting features, though. The high resolution (375m) I05 (11μm) brightness temperature imagery showed a very disorganize circulation, which is not surprising as Ian was being weakened significantly as it transitioned over Florida. 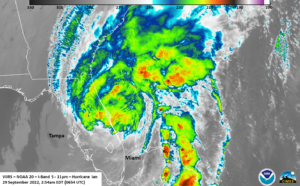 The moon was at Waxing crescent (14% illumination), meaning that the primary source of light in the DNB continues to be from airglow. As with the last few days, several faint mesospheric gravity waves were able to be observed, something that can also be seen in dissipating storms, such as Ian

In this case, these waves were associated with the feeder bands that were over the Atlantic

The ATMS imagery did show a bit of circulation, but it was extremely disorganized. 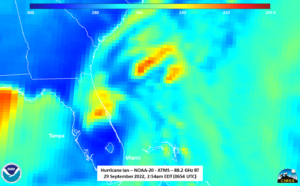 In addition, the coldest temperatures were associated with the remaining convection seen in the IR imagery

Ian, which is now a tropical storm (as of 5:00am EDT, 0900 UTC), it is expected to re-intensify slightly as it pulls over the warm Atlantic waters before impacting South Carolina this weekend.