The aftermath of Hurricane Laura was evident as it rapidly pulled northward after making landfall on the morning of 27 August 2020. Some of the first images from Lake Charles included the image of the National Weather Service WSR-88D at the Lake Charles Weather Forecast office being completely destroyed

LCH radar is going to be down a minute…. #Laura – pic.twitter.com/7F1JAvm3y3

And the image of the CapitolOne building in Lake Charles, with most of the windows being blown out.

However, one of the most destructive images was how devistating the storm surge was, particularly in Cameron Parish, Louisiana, where Laura made landfall

Video of how devasting #Lauara's storm surge & wind were in Holly Beach, LA (west of Cameron). Some homes were obliterated and wiped clean from their foundations. Video Courtesy Brandon Clement with Live Storms Media. #Laura pic.twitter.com/3TKfZznSq1

At approximately 2:08pm CDT (1908UTC) on 27 August 2020, barely 12 hours after Laura made landfall, S-NPP passed over the Louisiana/Texas coastline for a near nadir (straight down) look over the region. The NOAA LEO/GEO flood product, developed by Sanmei Li (GMU), was able to easily pick out several areas along the coastline where the resulting moisture from the storm surge remained through the afternoon. Recent significant improvements to this algorithm have allowed Dr.Sanmei Li to generate a 30-meter (m) flood map from the VIIRS imagery over the Continental United States. Below shows the downscaled, 30-meter, flood map over the southern part of Louisiana as well as over the Cameron Parish region. 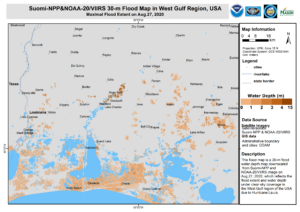 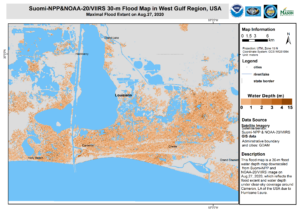 In addition, a timely Sentinel-1 pass at ~0010UTC on 27 August 2020, which was during the event, provided an even finer resolution image of the flooding along the coastline. The NOAA National Water Center, using difference techniques from a scene before the hurricane hit (0012Z on 15 August 2020), was able to provide an estimate of the flood inundation. 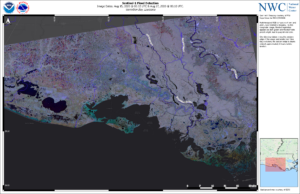 On the morning of 28 August 2020, the first “clear” nighttime scene of the region was able to provide an estimate of where power outages were still occurring. While the Waxing Gibbous moon (69% illumination) would washout some of the fainter lights, the NOAA-20 pass at ~0822Z (~3:22am CDT) was able to provide confirmation of the outages seen on poweroutages.us, a tracking website which gathers information from various utility companies, taken roughly an hour after the VIIRS pass 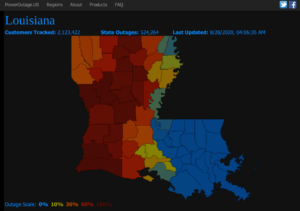 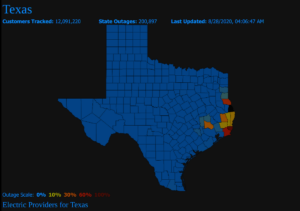 While it was cloudy, the outages were fairly obvious as compared to the reference imagery on 8 August 2020. Note the areas of cloud are shaded in the DNB imagery

It is expected that these outages will continue for several days given the extensive damage from Hurricane Laura.