At 18:00 UTC on 26 August 2020, Hurricane Laura strengthened to a Category 4 storm, with winds of nearly 140mph. The situation was serious enough that the National Hurricane Center to state that the storm would result in “Unsurvivable storm surge with large and destructive waves will cause catastrophic damage”, which was also sent out via social media showing how much storm surge was possible

Unsurvivable storm surge with large and destructive waves will cause catastrophic damage from Sea Rim State Park, Texas, to Intracoastal City, Louisiana, including Calcasieu and Sabine Lakes. This surge could penetrate up to 30 miles inland from the immediate coastline. #Laura pic.twitter.com/bV4jzT3Chd

By 00Z on 27 August 2020, Hurricane Laura had winds of 150mph, making it a borderline Category 5 storm. At 0600Z, Hurricane Laura made landfall as a Category 4 storm with winds of approximately 150mph near Cameron, Louisiana. By 0800Z (3am CDT), Hurricane Laura had decreased intensity to have winds of 130mph, making it a weak Category 4, almost a Category 3, storm as it was ~25 WNW of Lake Charles. This advisory was roughly 9 minutes after the near nadir overpass from Suomi-NPP. As seen in the high resolution (375m) I05 (11μm) brightness temperature imagery, one can see not only the well defined circulation indicative of a intense hurricane, but several tropospheric gravity waves.

If you zoom in, one can more clearly see these features

Also of note are the mesovorticies still contained within the well defined eye, something one doesn’t usually see over land. While the moon was at First Quarter (47% illumination), it was below the horizon. While the majority of the scene was lit by airglow from the mesosphere or by side-lighting from the city lights below, there were no obvious mesospheric waves from Hurricane Laura. This could be due to the fact that they were washed out due to the city lights. One other thing to note is a lightning streak within some of the convection in the Gulf of Mexico. 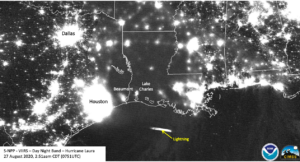 Speaking of lights and power outages, it is important to note not to draw any information about areas of outages from the imagery, given that most of the region was obscured by cloud. However, it is interesting to note that if you zoom into the area around the eye, near Lake Charles, you can indeed see power in the Lake Charles and Beaumont areas. 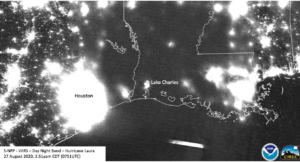 While the area around Lake Charles can be explained given it’s proximity to the eye, one can see just how intense the lights are by enhancing the imagery by an order of magnitude (i.e. making the upper limit be 1E-8 instead of 1E-9), where you can still see both cities 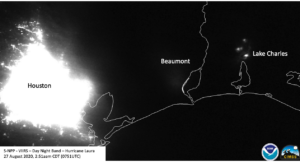 This is a bit impressive, given that the 0800Z NHC advisory said:

However, the winds in the Lake Charles area were strong enough to apparently destroy the WSR-88D weather radar at NWS Lake Charles

LCH radar is going to be down a minute…. #Laura – pic.twitter.com/7F1JAvm3y3

These radars are notionally able to withstand 135mph, and the last time a WSR-88D was destroyed was in 2017 during Hurricane Maria on Puerto Rico.

While the GCOM-W1 satellite was out of position, the ATMS on board S-NPP provided a glimpse into the inner structure of the storm. It showed a well defined circulation with convection completely surrounding it, with most of the convection centered on the northeast side. 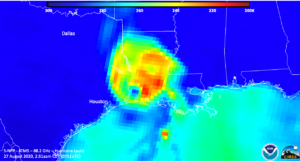 However, this was opposite of where the most intense convection in the I05 Brightness Temperatures were located

But it is where most of the rain was coming down according to the Microwave Integrated Retrieval System Rain Rate product, which is derived from ATMS 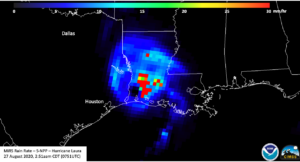 While from 25 August 2020, it is always interesting to show the winds from SAR. In this case, the winds derived from RADARSAT-2, operated by the Canadian Space Agency, derived winds of 67 kt at 3km resolution, with and NHC had Laura  at 65 kt at the time. 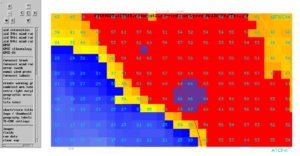 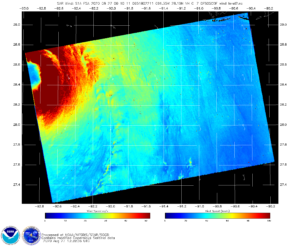 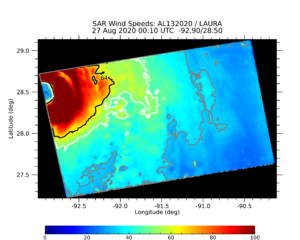 These winds are produced using methods described in Monaldo, Jackson, and Li (2017) and  other publications, NOAA’s Satellite Oceanography and Climatology Division, specifically the Sea Surface Roughness Group at NOAA/STAR, can derived winds from this imagery, and run routinely for tropical cyclones.

It also happens to be near Lake Charles, LA. Hurricane Laura is expected to decrease in intensity quickly and remain a depression until it exits into the Atlantic on Sunday. when it could re-intensify into an extratropical storm. Laura is expected to have impacts in the Louisiana region over the next several days including flooding and power outages. 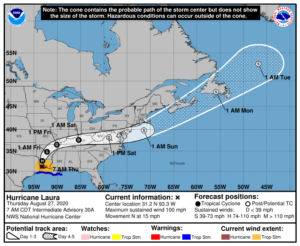