The dangerous Kincade fire, which is near Geyserville in Sonoma County, continues to burn and has grown significantly over the last several days. As mentioned on 26 October, Pacific Gas and Electric (PG&E) planned to cut off power to 940,000 customers due to winds reaching in excess of 80 mph. The screenshot below, taken at 3:40pm PDT ,shows the area where PG&E planned to cut off power to try and prevent new wildfires from starting, called a Public Safety Power Shutoff (PSPS) event. PG&E has set up interactive map here that shows the ares that will be impacted, with a  PDF map also available

The combination of high winds and dry weather is a reason the National Weather Services’ Storm Prediction Center to issue an “extremely critical” fire weather outlook due to strong winds and low relative humidity  to support critical to extreme fire weather conditions. 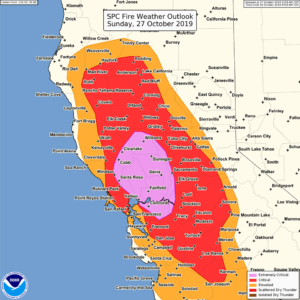 Image from NWS Storm Prediction Center Facebook page on 27 October 2019 at ~11:20am PDT

As seen by the National Weather Service’s Weather & Hazards Data Viewer website, at the ~3:30am, winds were very much lighter than on 27 October 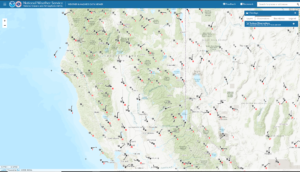 In fact at one of the RAWS stations near the Kincade fire, there were very light, with wind gusts of only 4mph 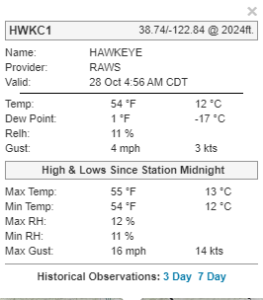 This good news as it is much lighter wind than the gusts that were close to 90mph observed during the day of 27 October 2019, rapidly fueling the expansion of the fire. 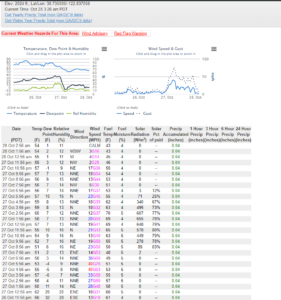 As of the 7:46am PDT on 28 October, CalFire reported that the fire had more than doubled in size, and was approximately 66,231 acres in size and was now 5% contained. At least 96 structures destroyed but no reports of any fatalities. These high winds caused an explosive growth of the fire has caused the evacuation zone to expand all the way to the Pacific Ocean and into Napa Valley. This can be seen in the screenshot below from the Sonoma County Incident Map. 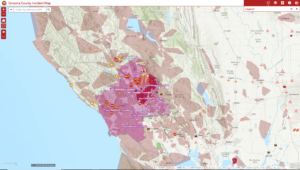 Screenshot from the Sonoma County Incident Map website on 28 October 2019 at ~3:30am PDT

This shows that there are mandatory evacuations into the town of Healdsburg and encroaching on Santa Rosa, CA. This meant that nearly all of Sonoma County has been ordered to evacuate. This means nearly 185,000 people have been forced to evacuate their homes.

The Kincade Fire was first observed from Suomi-NPP, which occurred at approximately 2:31am PDT (0931 UTC) on the western side of the pass. It is important to note that because the fire is at elevation, there are some parallax effects due to it being on the edge of the scan, despite the terrain correction applied to the geolocation data. As can be seen in the high resolution (375m) I04 (3.75μm) brightness temperature, the fire is clearly encroaching on the city of Healdsburg, CA. This is due to the northeasterly winds pushing the fire to the south and into the Southern Alexander Valley, exactly where CalFire said it was beginning to approach on the morning of 27 October, 2019. 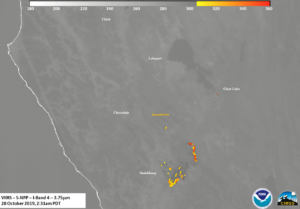 There is also a new hot spot near Clear Lake, CA. This is also observed in the VIIRS Active Fire (VAF) Product, as processed by CSPP. 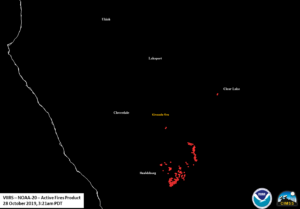 The most intense fire at this time was likely on the northeast side of the fire due to the fact there was the hottest brightness temperatures in the I04 (3.75μm) and M13 (4.05μm) as well as a pixel where the Day Night Band saturated out. 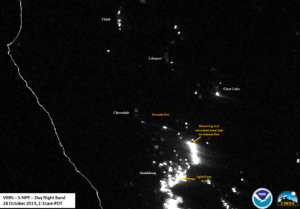 The NOAA-20 pass ~50 minutes later at ~3:21am PDT (1021UTC), observed the Kincade fire at near nadir. This meant that the satellite was able to observe the fire with close to the best possible view. Unlike the case from 27 October 2019, there appear to be no pixels that are saturated. This could be due to the fact that, while the fire was still burning intensely, it was not exhibiting the explosive growth seen on 27 October 2019. Also of note is the lack of a hot spot near Clear Lake, CA. This could mean that it was a controlled fire to burn a control line or a spot file caused by embers from the Kincade fire. 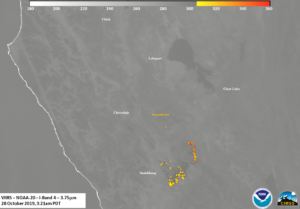 The lower resolution (750m) dual-channel, M13 (4.05μm) also showed the warmest pixels on the northeastern side of the fire 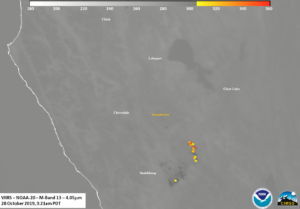 The VIIRS Active Fire product from NOAA-20, produced by NOAA/NESDIS/STAR, also has the most of the hot spots concentrated in the Southern Alexander Valley as well as on the ridge to the northeast of the valley. The following sliders show the temporal change in the I04 (3.75μm), M13 (4.05μm), M11 (2.25μm), Day Night Band and finally the VIIRS Active Fire Product between the two successive passes, showing that the fire remained fairly constant between the two passes.

One cannot necessarily see the smoke in the DNB due to the moon illumination being only 1% (Waning Crescent) illuminated as well as the fact the winds were not very strong, meaning that the smoke would settle into the valleys. In addition, while smoke is relatively optically thin in the IR channels, note the warmer temperatures in the valleys in the I05 (11μm) that appear to move between the NPP and NOAA-20 passes. This could be an indication of warm smoke coming from the fires that are being seen in the thermal channel sliding down the mountain valley.

As mentioned above, The plan was to cut off power to 940,000 customers. At ~3:30amPDT, which was about the time of the NOAA-20 overpass, roughly 1,032,448 customers were without power, primarily in northern California, as seen in the screenshot from poweroutage.us, with virtually all of them being from PG&E. That is roughly 20% of all PG&E customers and about 10% of all customers in all of California. 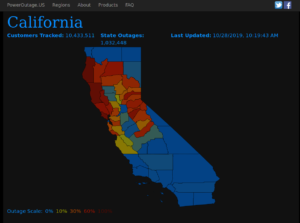 Outages from the Pacific Gas and Electric outage website taken at approximately 3:30am PDT this morning also showed a similar distribution of outages.

A zoomed out view of northern California, as compared to 23 October 2019, clearly shows that the outages in the same areas as the power trackers and consistent with the areas from 27 October 2019. Note that there are areas of cirrus over the Sierras that could mask out some weaker case. Also, note that you can see the Cypress Complex fire in the DNB imagery in the 28 October imagery. 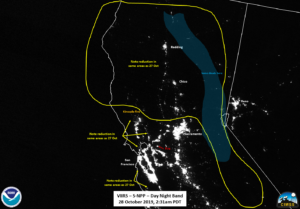 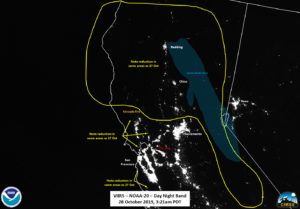 As of the fire incident update at 7am PDT, the evacuation orders have been expanded down to parts of Santa Rosa and evacuation warnings were issued for the city of Calistoga and parts of Napa Valley. A Red Flag warning will continue through the morning of 28 October with the possibility of  40-50 mph wind gusts through the narrow roads and steep terrain. Coupled with low humidity, this makes conditions favorable to the growth of the fire. CalFires is continuing to mitigate structure threats and find opportunities to construct control lines. Approximately 4,150 personnel are assigned as of the 7am update with 10 helicopters working fire suppression.