McIDAS-V can display Level II and Level III radar data. Radar display types include sweep views in 2- and 3- dimensions, cross sections, and isosurfaces. Multi-station composites can be made by overlaying images from adjoining stations. The remapping and overlaying capabilities of McIDAS-V make integrating radar data with other meteorological and geophysical data simple for even the novice user.

The examples below demonstrate some of the capabilities of McIDAS-V with radar data. Click on the image to view a larger version. If applicable, a link to the example bundle is also provided for interactive use in McIDAS-V.

[All examples on this page were created by members of the McIDAS User Services using McIDAS-V software.] 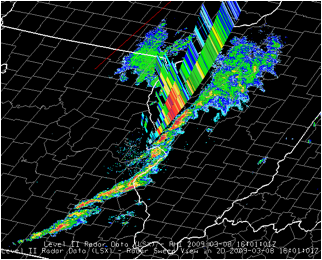 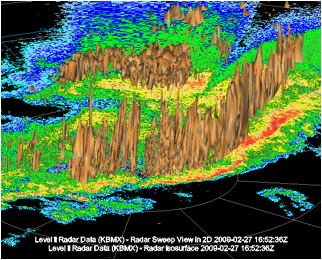 Level 2 radar isosurface at 40dBz over a strong storm in Illinois, Kentucky, and Tennessee. (Bundle)

Level 2 Base Reflectivity with range rings over a storm in Indiana. (Bundle)

Level 2 Base Reflectivity with a 3D sweep. (Bundle)

Composite display of 4 different radar locations of a storm over Texas and Oklahoma. (Bundle)

Radar overlaying a visible satellite image of a storm in Illinois, Indiana, and Kentucky. (Bundle)