A global network of Earth-orbiting weather satellites is crucial for predicting severe weather. Meteorologists rely on data from these satellites to make forecasts, however, certain areas of weather modeling are still limited due to data gaps and missing information.

Researchers at the University of Wisconsin-Madison Cooperative Institute for Meteorological Satellite Studies (CIMSS) and the National Oceanic and Atmospheric Administration (NOAA) have concluded that the inclusion of hyperspectral sounders on United States geostationary satellites could fill some of the data gaps and lead to significant improvements in predicting local severe weather. 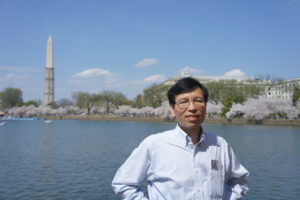 The study, led by CIMSS scientist Jun Li, investigated the utility of using hyperspectral infrared (IR) sounders as a way to augment global coverage of weather data by conducting an experiment known as an Observing System Simulation Experiment (OSSE). Since developing a new observing system is expensive, the OSSE allows researchers to develop simulated atmospheric parameters and test them in existing models to see how they perform. Their paper was published in Advances in Atmospheric Sciences in September 2018.

“Infrared sounders serve an important role because of their strength in gathering precise, vertical temperature, pressure, and moisture profiles of the atmosphere,” says Li. “A hyperspectral IR sounder on a geostationary satellite also provides better temporal resolution and can be valuable for forecasting cases of rapidly changing weather.”

For decades, IR sounders have been carried on polar orbiting satellites with a few exceptions. While the current array of polar orbiting satellites provides strong global coverage, there are inherent drawbacks to the system, namely temporal coverage. A geostationary IR sounder on the other hand, excels at observing rapidly developing weather systems from a fixed location.

“By having the capacity to continuously observe the atmosphere from a fixed location, you have a sentinel to see the genesis of weather systems,” says Li.

Li says that based on their research, a hyperspectral IR sounder over the U.S. would provide valuable information for the field of Numerical Weather Prediction, in addition to expanding global coverage. Compared to imagers like the GOES-16 Advanced Baseline Imager which provides a breadth of channels, a hyperspectral IR sounder can provide the depth of information to better understand atmospheric variables like water vapor.

Li and his colleagues are not alone in recognizing the utility of placing hyperspectral IR sounders aboard geostationary satellites. The World Meteorological Organization’s “Vision for the GOS [Global Observation System] in 2025” recommends a fleet of at least six geostationary satellites equipped with hyperspectral IR sounders (in addition to high-resolution multi-spectral Visible/IR imagers and lightning imagers).

In December 2016, the China National Space Administration launched Feng Yun-4, an experimental geostationary satellite equipped with the Geostationary Interferometric Infrared Sounder (GIIRS) and the European Space Agency (in partnership with European Organization for the Exploitation of Meteorological Satellites) is planning to launch their Meteosat Third Generation satellite with an infrared sounder (IRS) in the coming years.

“The OSSE is one perspective to demonstrate the utility of adding more hyperspectral IR sounders on geostationary satellites,” says Li. “We are looking forward to working with the real-time data coming in from the GIIRS sounder and incorporating it into models to better understand ways to improve forecasts.”

This work was supported by the Space Science and Engineering Center and the National Oceanic and Atmospheric Administration.