As the saying goes, “it’s an honor to be nominated.” But it can also be rather humbling to receive an award because colleagues feel that you “have made outstanding contributions to the atmospheric or related oceanic or hydrologic sciences or their applications during a substantial period of years.” 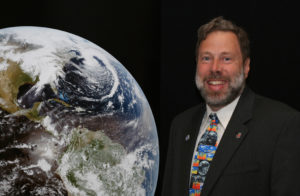 Tim Schmit, a National Oceanic and Atmospheric Administration (NOAA) scientist stationed at the Cooperative Institute for Meteorological Satellite Studies (CIMSS), has been elected as a Fellow of the American Meteorological Society (AMS) for 2019. He is one of 27 new Fellows who were honored at the 99th AMS Annual Meeting in Phoenix, Arizona.

Schmit has been making contributions to the atmospheric sciences since he began working for CIMSS in 1987. In 1996 he was hired by NOAA – keeping CIMSS as his duty station – for his growing expertise in the Geostationary Operational Environmental Satellite (GOES) program. Support letters for Schmit’s AMS Fellow nomination noted his instrumental role in the success of GOES, with the lead nominator Jeff Hawkins (retired, formerly with the Naval Research Laboratory, Marine Meteorology Division) lauding his wide-ranging knowledge and the general recognition of Schmit as the GOES expert within the community. Similarly, Dr. Steven Goodman (GOES-R Senior Program Scientist Emeritus and Fellow of the AMS) described Schmit as “a leader in defining and executing the [GOES] mission requirements.”

In recent years, Schmit has focused his efforts on the Advanced Baseline Imager (ABI) flying on the newest generation of GOES satellites. His involvement began long before launch, starting with advice on the spectral channels to be included on ABI, and continues post-launch. Goodman writes, “Tim has spent his career ensuring the quality of the visible and infrared imagery produced from GOES data, so that forecasters can accurately analyze and display the imagery and derived products.”

Schmit has also made service to the AMS community a priority, whether serving on committees, taking on the role of a BAMS editor, or teaching AMS short courses. In fact, Schmit presented on the ABI at a short course titled “GOES-R Series: Forecasting Applications” at the 2019 AMS Meeting.

Schmit’s commitment to the community, writes Hawkins, “directly reflect[s] his passion to share his knowledge and skill with others in the profession.”