Whenever a new weather satellite is launched, the satellite meteorology community eagerly awaits the coming stream of data. Sometimes, though, the new satellite sensors exhibit anomalies that negatively impact the quality of the data, or whether it is even available. So as the data flow begins, members of the that community are called upon to investigate and find ways to mitigate any problems.

Such was the case for a small group of researchers at the University of Wisconsin–Madison Cooperative Institute for Meteorological Satellite Studies (CIMSS) after the launch of the latest US Geostationary Operational Environmental Satellite, GOES-17.

The Advanced Baseline Imager (ABI) on GOES-17 experienced overheating from the sun due to faulty loop heat pipes that serve to cool the instrument’s sensitive detectors. That overheating had a dramatic impact on the quality (and quantity) of usable data.

Tim Schmit is a scientist with the National Oceanic and Atmospheric Administration’s (NOAA) Advanced Satellite Products Branch (ASPB) who is stationed at CIMSS. He recalled viewing an animation he had created of full disk water vapor imagery not long after infrared data were first available. Initially the loop looked just as good as ones from the previous GOES, GOES-16. But before long, he could see errant stripes that soon became bands of missing data.

“And then literally, it faded to black, like the end of a movie,” says Schmit.

16-Panel GOES-17 Full-Disk Advanced Baseline Imager (ABI) Imagery from 14 April 2019 showing the loop heat pipe issue on one of the worst days of the year.

In response to the problem, NOAA and NASA formed teams to consider options in three areas: science, constellation (whether and how other satellites could be moved to fill in the data gaps), and engineering. As CIMSS researcher Mat Gunshor noted, one of the complications was explaining the timing of the data issues. The loop heat pipes fail to disperse enough heat and radiation from saturating the detectors when the instrument faces the sun – which is at night over the US, rather than during the day, because of the orientation of GOES-17 as it orbits the Earth. In addition, not all of the 16 bands, or areas of the electromagnetic spectrum, in which measurements are being made are equally affected. Bands 8 through 16, which are the longer wavelengths, are affected, but the data problems do not get progressively worse with longer wavelengths. One final complication is that overheating is a more significant issue at certain times of the year.

In other words, as Schmit explains it, “everything’s constant – other than the day, the time, and the band.”

The engineering team was able to better optimize the operation of the GOES-17 ABI, so as to greatly improve the data availability. But, because of the temperature instability, the algorithm used to calibrate the data did not perform well. In an offline test environment, the instrument vendor, Harris Corporation, adjusted the calibration algorithm to reflect the changes in temperature over time, calling the new version Predictive Calibration. To evaluate their adjustments, Harris sent files to the GOES-R Program Office, which in turn sent them on to CIMSS where Schmit and Gunshor analyzed and provided feedback on how well the new calibration performed – not only on its overall effectiveness, but also on its timing (does it need to start – or end – earlier or later). Once again, time of day plays a role in the cooling system issue and in order to acquire as much high-quality data as possible, you need to mitigate just those portions of the data stream that are affected.

On July 25, 2019, Predictive Calibration became operational, and according to Schmit has been working well since. 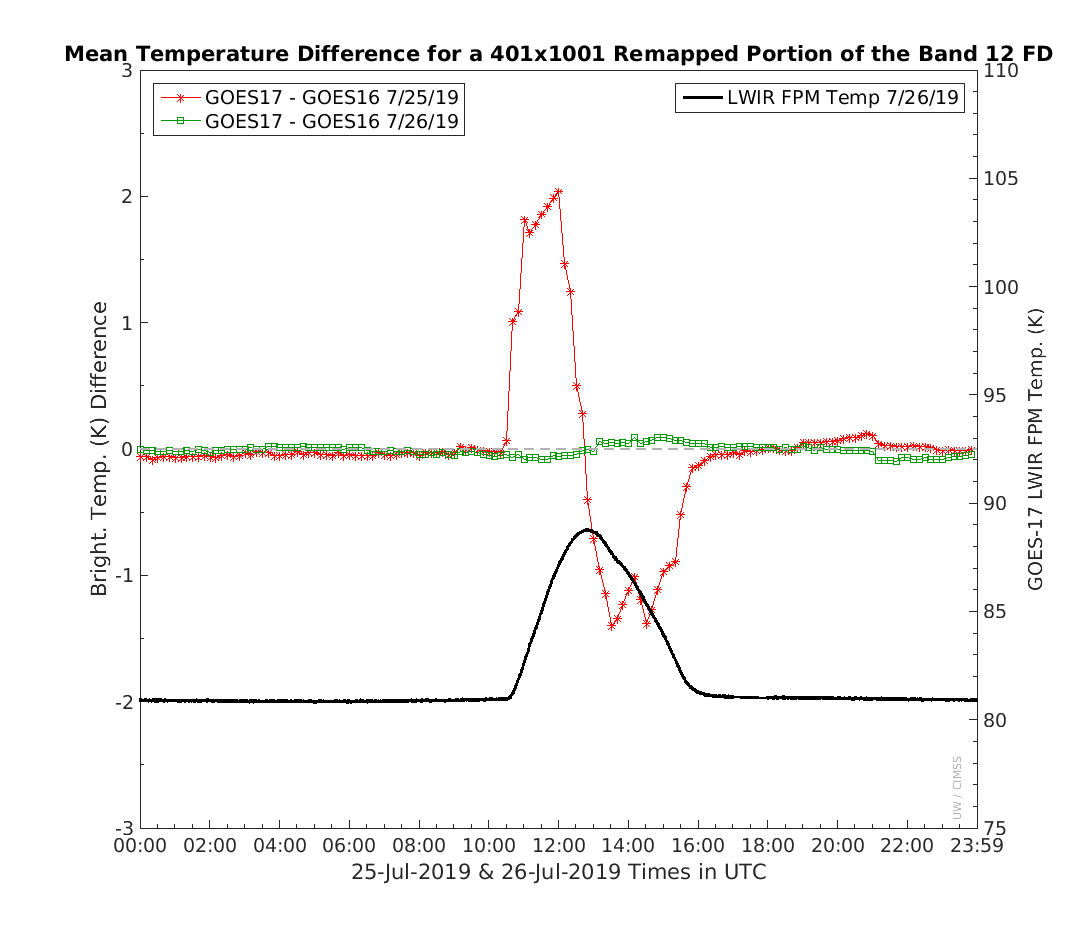 The brightness temperature bias between GOES-17 and GOES-16 ABIs before (red stars) and after (green boxes) Predictive Calibration was activated. This is from the full disk sectors of band 12 (9.6 µm). Also plotted (black solid) is the detector temperatures.

Schmit and Gunshor have also been investigating improving when the data are flagged during times of abnormally high detector temperatures.

“Data quality flags were not envisioned with this kind of problem,” says Gunshor.

Previously, data were flagged as bad based on a specific temperature threshold. If a detector’s temperature went above that threshold, all bands 8-16 would immediately be flagged as unusable. To prevent wholesale rejection of those bands, Schmit and Gunshor modified a look-up table that refines how each band individually (8-16) is determined to be good or bad. These additional adjustments were possible as a result of the improved data quality associated with Predictive Calibration. While in some cases it may be obvious to the user that the band is bad – as in the example of the loop Schmit created fading to black – the point is to keep the process streamlined for users, especially when timeliness and automation is critical.

“We need to have computers do [the flagging] in this new world order of AI (artificial intelligence) learning, automated products, and data rates,” says Schmit.

After a period of testing, the new flags were transferred into operations on August 9, 2019. 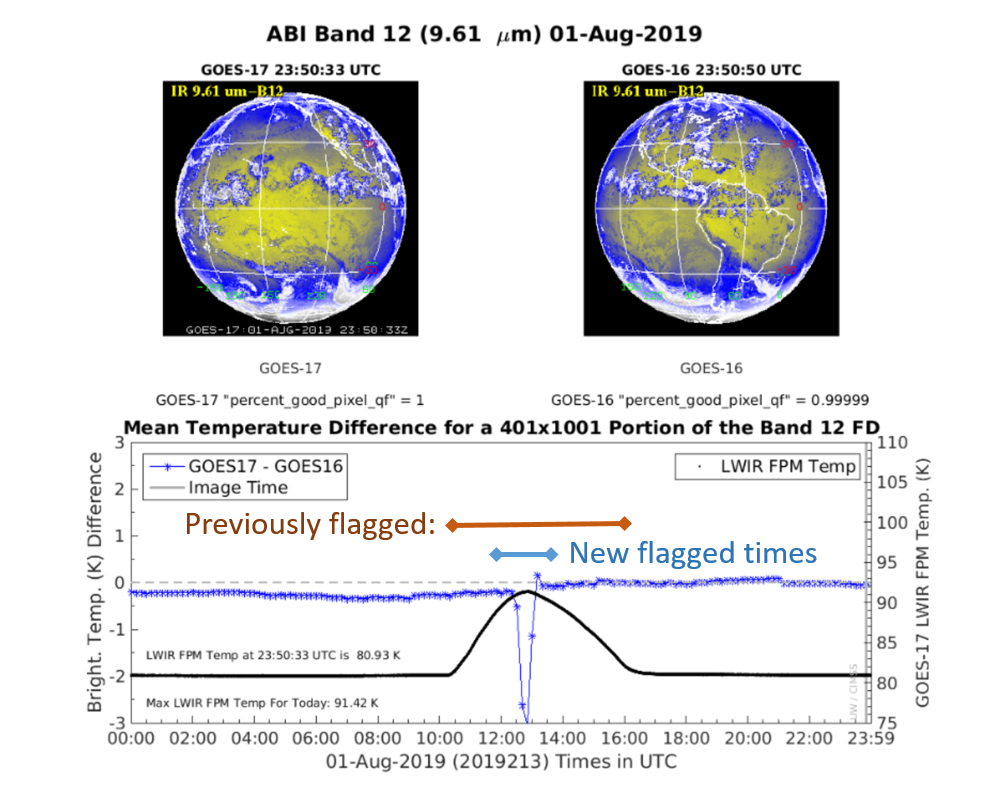 The top row shows ABI band 12 images from both GOES-17 and 16, while the lower panel demonstrates how the new thresholds reduce the time of flagged data. Credit: Schmit, NOAA ASPB

Although they’ve made good progress to date, the question remains in their minds of how much more improvement is possible to manage the effects of the faulty loop heat pipes. Schmit and Gunshor are hopeful to get to the point where they are nitpicking over minor adjustments. As Gunshor noted, “Unfortunately, it’s unsolvable [for GOES-17].”

In the meantime, the remaining satellites in the GOES-R series, GOES-T and GOES-U, will have new loop heat pipes. The launch of GOES-T was delayed in order to redesign, manufacture, and install the new versions. And as the GOES-R program moves forward, from pre-launch testing to post-launch checkout and beyond, scientists at CIMSS will be involved.

“Through the whole GOES program, we’re the go-to place for them to ask if something is working,” says Gunshor.

This work was supported by the GOES-R Program Office.