Precipitation, as rain or snow, is central to the Earth’s water cycle and to sustaining life on the planet. Too much — or too little — can be catastrophic. New satellite-based instruments that collect data over broad swaths of the atmosphere are making it possible for scientists to better monitor what type of precipitation will fall, as well as where and how much. These precipitation patterns are an important piece of the weather and changing climate puzzle.

A trio of researchers from the University of Wisconsin–Madison Space Science and Engineering Center (SSEC) and the National Oceanic and Atmospheric Administration’s (NOAA) Advanced Satellite Products Branch (ASPB), based at SSEC, are working on independent, but related, studies of snowfall as part of the new NASA Precipitation Measurement Missions (PMM). Their investigations all focus on snowfall to understand how these events are linked to regional – and global – hydrology. 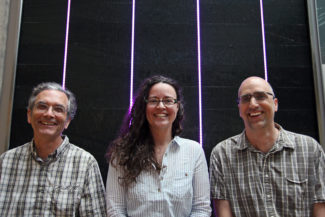 “NASA was looking for studies in three areas: process studies, algorithm development and applications,” says SSEC scientist Norm Wood. “Each of us is in a different area, but our research sits at the cross section of all three, so it is very complementary.”

The PMM is an umbrella mission that consists of a worldwide network of satellites including the Global Precipitation Measurement (GPM) Core Observatory, a successor to the Tropical Rainfall Measuring Mission (TRMM) satellite. While no longer operational, data from TRMM’s Precipitation Radar and Microwave Imager during its 20-year mission has been crucial to improved understanding of rainfall in the tropics, where much of the driving force behind Earth’s water cycle originates.

While they lead projects that differ in scope and methodology, the three scientists are trying to do something similar, and that is, make a critical breakthrough for understanding snowfall events that will have global implications.

Two types of observations are available with the GPM mission: passive microwave observations from the multi-channel GPM Microwave Imager (GMI) and profiling radar observations from the Dual-frequency Precipitation Radar (DPR). Wood’s validation study focuses on the latter of the two. He is looking at orographic snowfall to learn how changes in terrain elevation, shape and form influence snowfall over those areas. Mountain ranges and other types of topography, whether inland or along coasts, can influence the amount and intensity of snowfall.

Up until the age of satellites, many observations of precipitation in the atmosphere have come from ground-based radar systems, forcing the instrument to look up at elevated terrain. However, because the terrain may obscure the field of view, ground instruments are limited as to what they can actually see.

“By shifting this scenario to look at these types of systems using radars from space, we get better, more complete, representation of what is going on in the atmosphere over these regions,” says Wood. “Another important part of our research is to fill in a data gap that exists right now [between our ground and satellite data].”

As the satellite orbits the planet, it passes over different mountain ranges allowing researchers to see them under varying meteorological conditions. The idea is to select certain regions of elevated terrain and observe how the production of snow changes as weather systems flow over the region.

Wood is zeroing in on precipitation efficiency, a measure of how well the available atmospheric water is converted to snowfall. If forecasters can accurately predict how much water will be converted to precipitation in the form of snow, it will serve a range of needs from local agriculture and city planning to climate studies and weather model improvements.

Algorithm development in the Great Lakes

Growing up in Michigan’s Upper Peninsula, NOAA ASPB scientist Mark Kulie has seen his share of snowstorms, blizzards and white-outs. He has had a lifelong interest in snowfall patterns, especially in the Great Lakes region. Working with ground-based radars in Marquette, MI, his research, in collaboration with SSEC scientist Claire Pettersen, has isolated a specific type of snow known as convective snow. 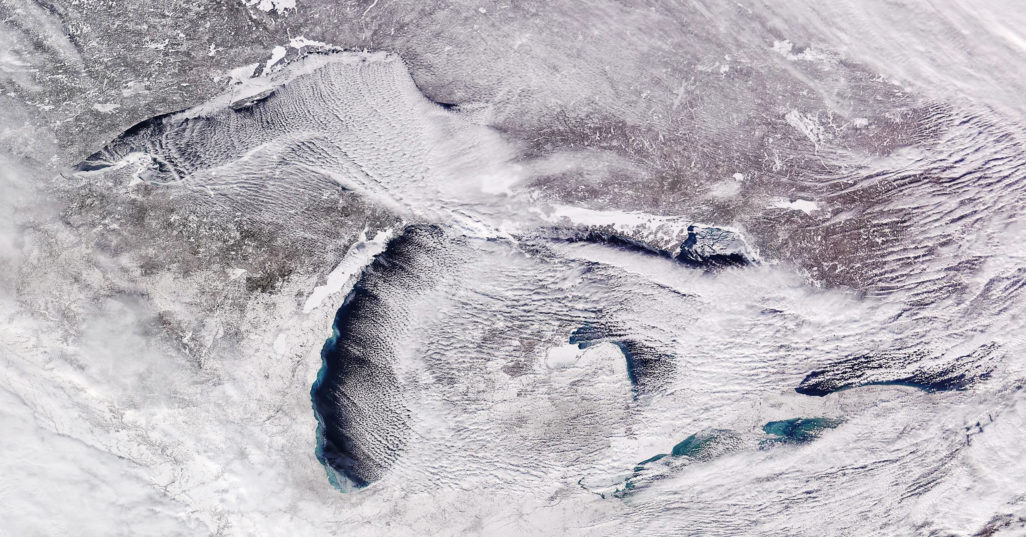 Commonly known as lake or ocean effect snow, this type of snow is typically very shallow — often forming less than a kilometer from the Earth’s surface — and results from the interaction of cold air over warmer water. Currently, lake effect snow warnings issued to the public are derived from ground-based radars that can miss the extent, as well as the amount, of accumulation.

Kulie’s interests lie in assessing the accuracy of GPM estimates of convective snow as compared to those obtained from ground measurements and then, improving those estimates to create more robust global convective snow datasets.

“What we have learned, though, is that while the GMI sees very distinctive signatures, or characteristics, that are unique to convective snow, the DPR is not as sensitive,” says Kulie.

His research will aim to translate those GMI signatures into snowfall rate estimates and use ground observations to validate and improve DPR estimates for heavier snow. Kulie anticipates this dual-pronged approach will result in better algorithms to monitor global snowfall because observational tools can be employed to check the accuracy of computer-generated snowfall. Improved GPM observations and products will be critical in evaluating snowfall datasets that are produced by computer model simulations. These include reanalysis datasets often used to study snowfall in remote regions that lack routine observations as well as in climate models developed to project future global snowfall amounts.

Just as in the higher elevations, this regional work must also account for differing topographies, like coastlines or lake ice versus open water that can influence precipitation.

“These lake-effect snow events are very important to regional hydrology around the world,” explains Kulie. In a warming climate with diminishing sea ice and more open water, these types of events may occur more frequently, he says. Kulie’s goal is to create a more robust and long-term, earth monitoring dataset to support better global forecasting and analysis of global trends.

Applications in Norway and Alaska

Atmospheric rivers are like conveyor belts of moisture, extending sometimes hundreds of miles, and are commonly associated with intense rainfall along the California coast. But, these well-defined ribbons of anomalously high water vapor flowing in the atmosphere are also responsible for extreme snow accumulation farther north, along the coasts of Norway and Alaska. In fact, they frequently occur in high latitudes and are associated with flooding, highlighting the need for better water resource management in Europe and the US. 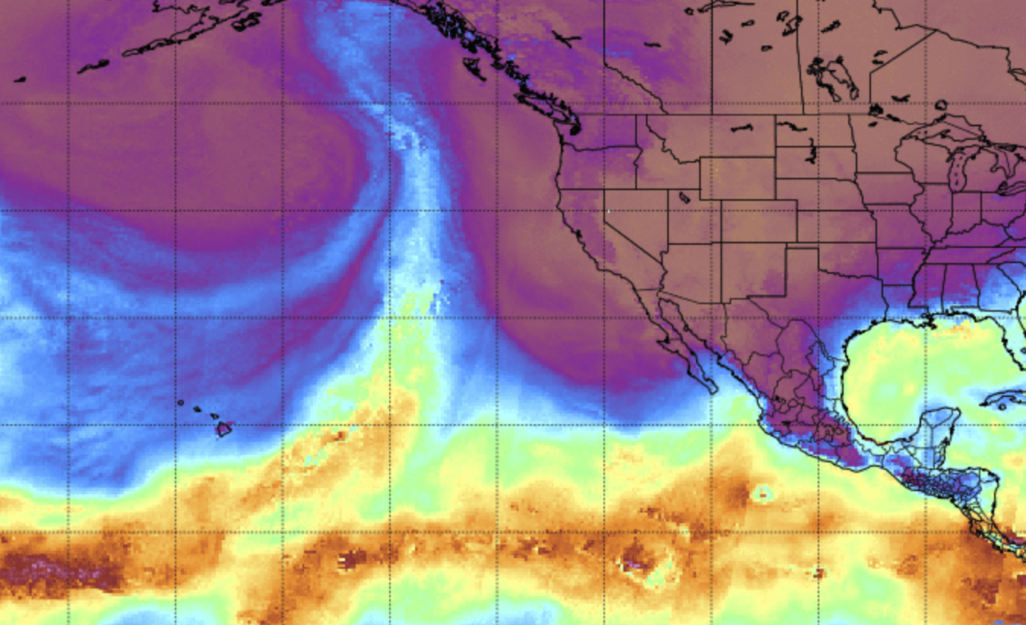 “My study will hone in on these two coastal routes, including over the ocean, to see if we can determine how atmospheric rivers may influence snowfall and mixed-phase precipitation,” says Pettersen. Importantly, she wants to determine whether snowfall amounts involving an atmospheric river event contribute disproportionately to the water cycle at high latitudes.

The Norway coast, with its fjords and surrounding mountainous areas, and Alaska, are situated between 50 degrees and 70 degrees north latitude, which is within the GMI footprint. In addition, the temporal coverage is relatively high due to the GPM orbit.

The study will compare more than five years of GMI data to ground-based measurements and reanalysis products to assess the impact of these wintertime precipitation events.

Pettersen aims to apply the results of this research to help fine-tune hydrological models in order to improve predictions of natural hazards like flooding.

“Like California, Scandinavia and the United Kingdom, are well aware of the impacts of atmospheric rivers,” says Pettersen.

Whether from the ground or from a satellite, the roots of measuring Earth’s atmosphere run deep at SSEC. The earliest glimpses of cloud motions and atmospheric circulation, came with SSEC’s Spin Scan Cloud Camera on ATS-I in the mid-1960s setting the stage for what are now crucial observing capabilities. Once demonstrated, the era of satellite-borne instruments quickly became the norm, each generation improving on the one that preceded it.

SSEC researchers have been involved with TRMM since its launch, adding to our collective knowledge about tropical rainfall, the hydrological cycle, and the global energy budget of the planet. In fact, Kulie’s first job involved working with TRMM data in 1997.

Wood, Kulie and Pettersen bring their individual strengths to the PMM collaboration along with their expertise using both satellite and ground observations. “It is advantageous because we are complementing, and enhancing each other’s unique work, rather than competing with each other,” says Pettersen.

Each of the three-year studies is supported by NASA.