Like thermostats, the Arctic and Antarctic are important for regulating Earth’s temperature. The poles respond to warming with glacial melt that results in sea level rise, shifts in mid-latitude weather patterns and changes in global temperatures that can be harbingers of broader climate change. To date, limitations in satellite technology have hindered scientists’ ability to gather consistent information about the poles — the resulting data gaps have implications for the long-term accuracy of climate models and weather prediction.

A new NASA mission called the Polar Radiant Energy in the Far-InfraRed Experiment, or PREFIRE, is on track to address these missing data and help scientists better understand how the Arctic regions regulate Earth’s temperature and climate.

“By filling the far-infrared observation gap and integrating these new observations into models, PREFIRE offers a pathway to improving polar climate predictions,” says Tristan L’Ecuyer, director of the Cooperative Institute for Meteorological Satellite Studies at the University of Wisconsin–Madison and principal investigator of PREFIRE.

NASA is scheduled to launch PREFIRE’s two small CubeSats — roughly the size of a thick laptop computer — in December 2022. Each CubeSat will orbit Earth every 90 minutes, with staggered orbits to provide new data every 45 minutes. The detectors inside will scan the Earth’s surface and measure emitted energy in the far-infrared region of the electromagnetic spectrum, an important piece of Earth’s energy budget and one that is approximately balanced by incoming sunlight. When outgoing and incoming energy are in balance, Earth’s climate is in equilibrium and global temperatures do not change. But when Earth absorbs more radiation than it emits, as is the case today, then the planet warms.

Over the Arctic, nearly 60 percent of radiation that is emitted to space is in the form of far-IR radiation, yet despite more than 50 years of satellite observations, scientists have little understanding of the processes that affect this key component of the polar energy budget. Historically, measuring far-IR wavelengths has been a technological and engineering challenge due to the small energies they carry that can easily be overwhelmed by noise or interference in the signal.

However, while developing instruments for studying the Moon and Mars in the early 2000s, NASA’s Jet Propulsion Laboratory developed breakthroughs in detector design that enabled low-cost and effective far-IR measurements for the PREFIRE mission. Each of the two PREFIRE satellites will carry a Thermal Infrared Sensor, or TIRS detector, to measure emissivities at various frequencies in the far-IR range. While loosely defined as a range of 5 to 1,000 micrometers in wavelength, the far-IR measurements captured by the PREFIRE mission will focus on a narrower range of 5–54 micrometers in wavelength.

“Unlike current instruments whose measurements are limited to wavelengths less than 15 micrometers which only cover about half of the energy Earth emits to space, the range of wavelengths measured by PREFIRE encompasses more than 97 percent of Earth’s emission,” says L’Ecuyer.

He also notes that while the focus of the mission will be Earth’s poles, the satellites will collect data from other regions such as the mid-latitudes and the tropics because it is important to consider the Earth as one large system when trying to understand its energy budget. The mission is currently planned to last one year and L’Ecuyer says that timeframe should provide a comprehensive picture of far-IR emissions over the poles and the rest of the Earth. 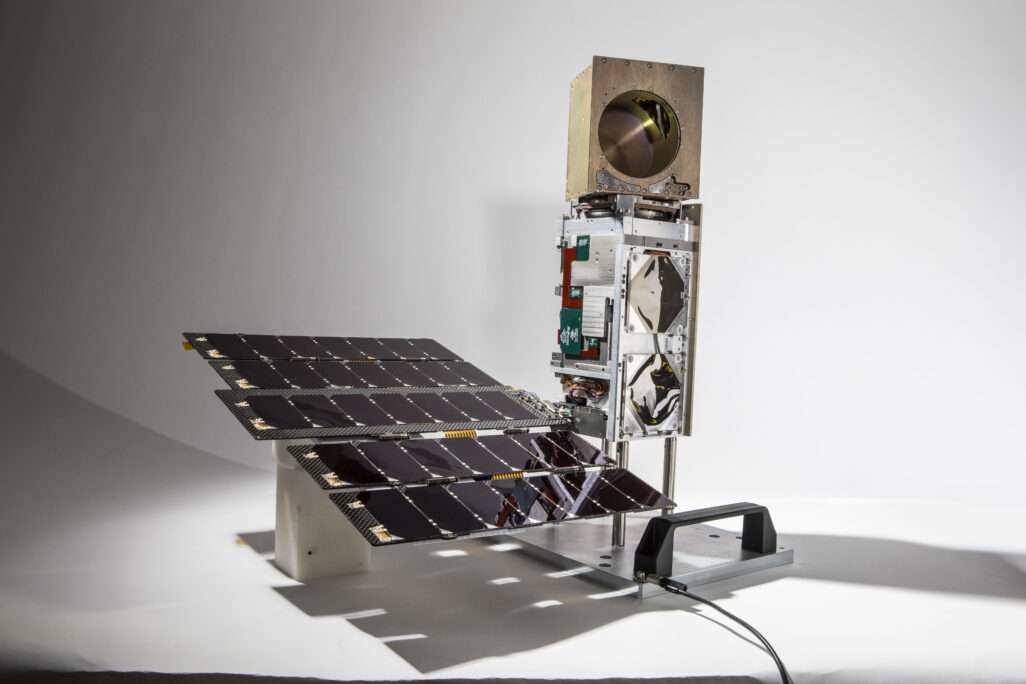 What is a CubeSat?

It’s a small satellite. Compared to previous generations of large, school-bus sized satellites that orbit the Earth, CubeSats’ diminutive sizes vary from a loaf of bread to an air conditioner unit and can be more readily deployed in space.

CubeSats mark the latest development in satellite remote sensing by making use of small and inexpensive satellites to answer specific scientific questions at a fraction of the cost of conventional Earth-observing satellites. CubeSats are not intended to carry multiple sensors or detectors, but can cover a wide spatial (and temporal) range by deploying multiple satellites per mission. For example, the TROPICS mission will launch seven CubeSats that will collect specific information around Earth’s equator and mid-latitudes in order to improve hurricane and tropical cyclone predictions.

Until now, satellites were designed as large, multi-purpose platforms intended for mission timelines of more than 10 years. Weather satellites such as GOES-16, Himawari-9 and NOAA-20 carry an impressive array of detectors and sensors, each requiring significant planning and design for function and longevity. These extra parameters add significant time to mission planning and construction. They also increase costs.

With the combined information gathered through long-term satellite missions and CubeSat deployments, atmospheric and climate scientists will have a more comprehensive understanding of the forces at play in Earth’s atmosphere.

From beginning to end, student research crucial to PREFIRE mission

L’Ecuyer’s vision for the PREFIRE mission included students at every level of the project. Since 2017, undergraduate and graduate students have supported the mission through research, algorithm development, data analysis and most recently, communications. Altogether, there are 10 students working on the project from the University of Wisconsin–Madison, the University of Colorado and the University of Michigan.

“We have more students on the project than science team members,” says L’Ecuyer. “It’s a statement of what you can do with these smaller missions. We have a small staff, a focused science question and we’re able to involve students to help answer these critical questions and arrive at solutions.”

Compared to previous satellite missions, PREFIRE’s $33 million budget is a fraction of the larger satellite programs like GOES-16 which cost more than $1 billion and took more than a decade to launch. L’Ecuyer sees smaller CubeSat missions as a promising way to answer urgent science questions with an added flexibility and responsiveness.

“There is no shortage of enthusiasm on the team,” says L’Ecuyer. “This work goes beyond an experiential internship for students — the mission’s success depends on their success and that brings a lot of positive investment and commitment to the project.”

One student, James Anheuser is a third year Ph.D. candidate who has been working with the PREFIRE mission since 2019. His research is focused on verifying the PREFIRE data as it is transmitted to a receiver on Earth. When a new satellite launches, a calibration period is required to ensure transmissions are usable, accurate and verified. This is done partly through a process known as collocation or comparing the new satellite’s data to other satellites currently in operation to confirm those data are within an acceptable range.

“My research involves the creation of algorithms that will collocate the observations of PREFIRE far-IR measurements with other satellites,” says Anheuser. “The idea is to match the far-IR observations with those of physical features such as clouds, ice thickness and ice concentration, to see how we can identify connections between atmospheric and surface features and how they radiate in the infrared.”

For decades, the global fleet of weather satellites have provided scientists with abundant information about atmospheric features like clouds, water vapor, ice crystals and surface measurements. Many of these radiate in the near-, to mid-IR providing a long-established database used to understand their radiative transfers. PREFIRE will collect new data not previously recorded in a systematic way, so verifying these measurements will be critical to its success.

“By studying those connections we can learn more about local weather, climate and the outgoing far-infrared and connect that with the greater climate picture,” says Anheuser. “Currently we are simulating what that data will look like and using those simulations to write algorithms that will take the data from the instrument and turn it into something more meaningful for climate and research.”

In June 2021, the PREFIRE mission passed a major planning milestone, known as the Critical Design Review, and is on track to complete the next phase at the end of the year.

“We’re at a sort of frontier in the Arctic regarding climate models,” says L’Ecuyer. “Climate models are fairly accurate, but they vary, resulting in disagreement on what the Arctic temperature and sea ice levels will be in 50 years.”

This research is supported by NASA. Image credit freevectormaps.com